Learning to teach and learn outside the box 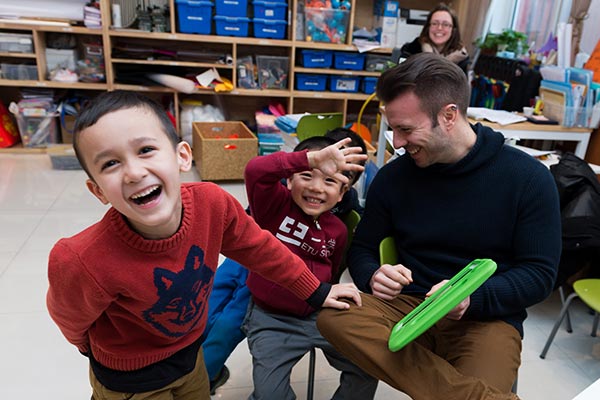 When mother-of-three Li Yinuo returned to Beijing after living in the United States, she was flummoxed－like many Chinese parents－about how to choose the right school for her oldest son.

“There is no satisfactory option,” sighs Li, formerly a partner for management consultancy McKinsey in the US and China. “Public schools stymie creativity and individuality while international schools end up nurturing Chinese as foreigners.”

Chinese families often plan their children’s future from infancy. Parents used to save every penny to buy a property in a good school district, however shabby the home was.

Now many are looking for alternatives, but they have few options.

She was a straight-A student in that system herself, but she knows its drawbacks: “Rote learning and homogenization are the last thing we want.”

In March 2016, she decided to start her own school, inspired by a visit to California’s Khan Lab School, which operates under the motto “Everyone’s a teacher. Everyone’s a student.”

“It resonated with me. Young people are capable of far more than society currently recognizes,” says Li.

She was a straight-A student in that system herself, but she knows its drawbacks: “Rote learning and homogenization are the last thing we want.”

In March 2016, she decided to start her own school, inspired by a visit to California’s Khan Lab School, which operates under the motto “Everyone’s a teacher. Everyone’s a student.”

“It resonated with me. Young people are capable of far more than society currently recognizes,” says Li. 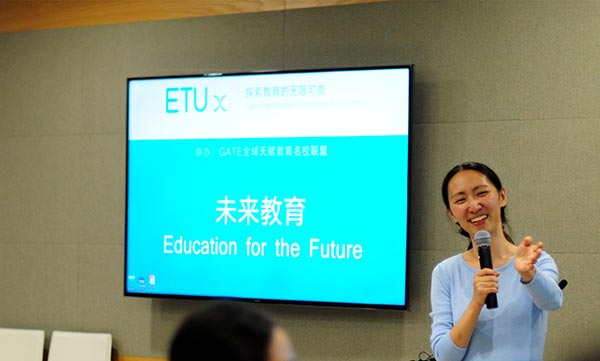 Driven by determination, Li and her team took less than six months to set up the school: the teachers, the principal, the permit, the initial capital and students.

On Sept 1, ETU School held its opening ceremony for children and parents in the Forbidden City. This symbolized Li’s vision of grooming “truly Chinese, truly global” graduates with immersion in Chinese language and culture, as well as global competence and mindsets.

Hua Yijia, a venture capitalist, recalls the doubts of family members when she registered her 6-year-old daughter. “I know it’s risk-taking, but any innovation starts small and since we got here, my daughter has never missed a day of school, even if she was tired or sick or had the flu. She told me she loves going to ETU.”

ETU borrows the experience of innovative education models like the US-based Altschool in using IT to support education, and High Tech High in project-based learning (PBL). It also focuses on supporting each teacher’s professional development, which is rooted in Li’s own experience in management consulting.

In one PBL project, children are invited to hand-make a vehicle over seven weeks. Alone or in teams, they will have an idea and sketch a design before they make a model. On completing the vehicle, they write down the major functions, how it came into being and what kind of journey it will take. Children feel free to do everything through the process and their tutors will evaluate if it’s workable and offer some assistance.

“Through these programs, ETU intends to empower students to realize they can shape the systems and solve problems with their own intellect and passion. Children don’t learn by being told; they learn by seeing what’s around them,” says principal Guo Xiaoyue. 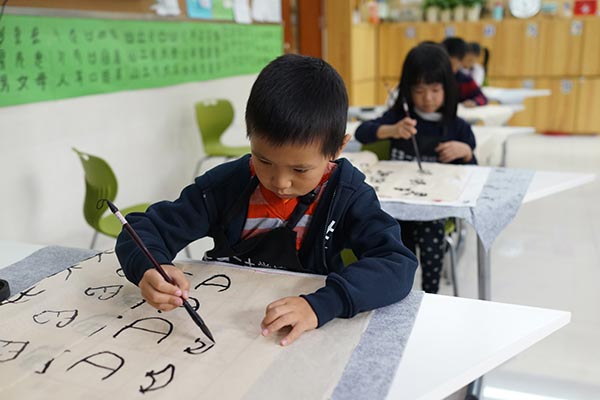 ETU is also innovating in Chinese and math learning. In most schools, students must learn to read Chinese characters by writing them many times to remember them. At ETU, teachers discuss with students why they need to learn the characters and how they can enjoy it.

“We love to learn characters through studying inscriptions on bones or tortoise shells and knowing how a character came into use,” says student Yu Jiayi.

Chen Chu, the math teacher and a Harvard graduate, invented a bank. Students can cash 10 grams of waste paper for one ETU yuan and buy the services or products from others at a school fair. The process of selling and buying is one application of math in life. Inspired, one kid kept a journal to record every experience involving math, like buying a subway ticket.

Math class is not about solving a problem and getting the correct answer, but using math to tackle life issues, says Chen.

Most Chinese had a different experience－suffering under the exam-oriented teaching and feeling education was removed from real life.

The modern gaokao began in 1977 and has been widely credited with selecting the best talents for China’s booming economy. However, many graduates regret being hostage to exams and ending up as a standardized commodity, struggling to find who they are and what they really want to do in life and work. 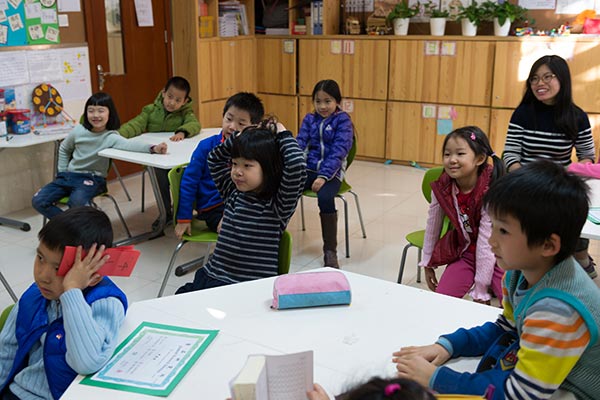 Kou Xuan, from Guangdong, decided when her son was born to take a different path. She wrote to ETU and asked if it could open a school in Guangzhou.

Kou was not the first to inquire. When ETU announced plans to launch branches, dozens of teams from more than 10 major cities applied to run them.

On the interview day, 11 candidate teams presented their ideas about personalized education and how they planned to practice it. If selected, ETU will provide them with support in terms of teaching, administration, teacher development, IT training and community resources.

Li and her husband Shen Huazhang, an IT entrepreneur, both bring their expertise to ETU. “We have three groups of people building the school: educators, business managers, and IT product managers/engineers. Good education philosophy and practices are its core, but we run this school as a modern business and mobilize social resources in an effective way via a tech platform that supports online communities,” says Li.

“The ETU lifelong learners community and ETU follower community currently have 6,000 members who are practitioners, followers and volunteers of innovative education. We are not only building a school. We hope to innovate in the education ecosystem by putting schools back in the center of communities.”

ETU has an app for parents and teachers, but it’s more than a tool for notifications and assignments. “Teachers will record their classroom observations and individual performances, while parents show how their children behave at home and write about their ideas and reflections,” says Guo.

In future, the app will collect enough data to draw a “portrait” of each student as a learner, both academically and emotionally, creating a portfolio of curriculum, activities and projects that suits each individual student to help them learn faster and better. 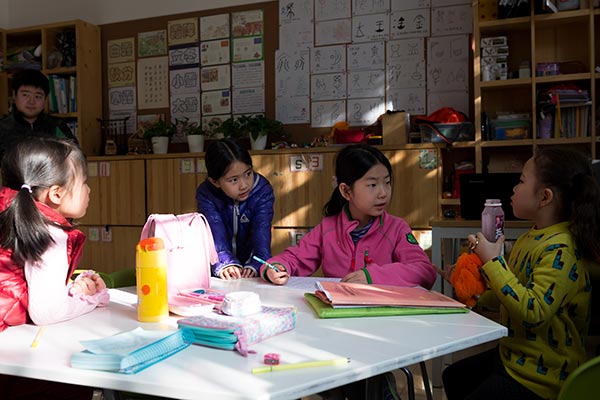 Parents, especially those with an innovative mindset, are clamoring to enroll their children at ETU, but it’s still a boutique school with 31 pupils.

It also costs up to 150,000 yuan a year, more than double the average annual Chinese household income. Critics claim ETU serves only the wealthy, but Li says running an innovative private school has significant costs, including staff and operating expenses. “We are a small school now, but we hope to reproduce our ecosystem through innovative practices. ETU is open to all partners and expects to be embraced by more schools, so if a public school is willing to cooperate even just in some aspects, we could make it happen via a project or even government procurement process,” says Li.

ETU has already initiated a partnership with a public school for teacher development and core teaching skills training. And it has a bigger ambition: to break the barriers between urban and rural schools and promote education equality.

Late last year, Ye Huimin, a rural teacher in Jiangxi, wrote to ETU, hoping to introduce its innovative methods and resources to rural areas and better tap the creativity of teachers. ETU supports the idea, but rather than replicating ETU in rural areas, they will support teachers like Ye by providing resources and training.

And the future? “ETU plans to extend to middle schools, but no one can tell what a future gaokao will look like. In 12 years, it might look different from today,” Li says.

“We can’t decide what 6-year-olds should learn based on the current evaluation and assessment system. We believe that as long as our children are sound in body and mind, acquire core competences and have the right values and perspectives, they will thrive, or at least qualify by any sensible standard anywhere in the world, even the gaokao.”